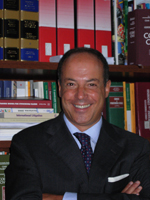 He was responsible for the Legal Affairs of the company FIN RITZ of Bologna, concessionaire of the Timberland, Polo and Ralph Lauren brands.

He collaborated with the law firm Grant-Herrmann-Schwarz & Klinger of New York (USA).

He founded the Law Firm specialising in international commercial and corporate law.

He enrolled in the Milan Bar Association and qualified to practise in the Rome Court of Cassation.

He is the author of numerous articles and publications in Italian and English for various publishers such as “Kluwer Law International”, “Il Sole 24 ore”, “Il Corriere della Sera” and “Ipsoa”. He collaborated in the activities of the “Centre for International Legal Studies” of Salzburg in the field of comparative private law.

He has drawn up the legal section of the publication “Business in USA”, an operational guide to export and investment in the United States, published by “Il Sole 24 Ore”.

He is co-author of the work “The recovery of international receivables” published by Ipsoa.

He is a lecturer and speaker on themes related to contracts, international corporate and financial law in collaboration with Confindustria, Professional Associations, Chambers of Commerce and private organisations such as the “International Institute of Research” (IIR) based in London.

He is a member of the Legal Committee of the American Chamber of Commerce, Confindustria as well as consultant and lecturer at “NIBI” (New International Business Institute) in matters of international law and cross-border litigation.

He is a member of the IBA (International Bar Association), the North American Regional Forum and the Human Rights Institute.

His memberships also include the ABA (American Bar Association) and of the International Law committee.

He was appointed on the list of consultants of the US Consulate in Milan.

He was appointed on the list of experts in international law by the Union of Lombardy Chambers of Commerce.

He collaborates with the editor “Il Sole 24 ore” as editor of the column “Observatory on international law” and writes for the magazine “Newsmercati” published by the Union of Lombardy Chambers of Commerce.

Maurizio Gardenal is a regular contributor to the NATO DEFENSE COLLEGE FOUNDATION as editor of the column “Lawfare” and is a member of the scientific committee of the NATO FOUNDATION.