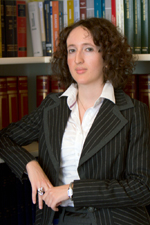 She graduated in Law at the University of Padua from 2001.

Registered in the Treviso Bar Association since 2006.

Since 2002 he has collaborated with WebDieci, portal of the Chamber of Commerce of Treviso, managed by the Treviso Tecnologia Special Company, providing articles of legal investigation related to IT law.

Since 2007 he has worked with the Law Firm Gardenal & Associati.