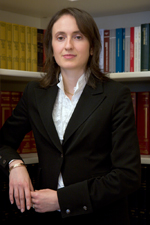 She graduated in Law at the University of Padua (2005), with a dissertation in European Community Law on: “Legal protection of innovative business methods in the European Union”.

From January 2006 to August 2008 he worked in a notary’s office in Vittorio Veneto (Treviso) where he also completed the notary practice.

Since 2008 he has been working at the Law Firm Gardenal & Associati.

Registered with the Treviso Bar Association since 2013.

Since January 2006 he has been collaborating with Treviso Tecnologia, special company of the Treviso Chamber of Commerce for technological innovation, as a columnist in the Patents and Trademarks section as “Specialist in protection of intellectual property, patents and copyright”.