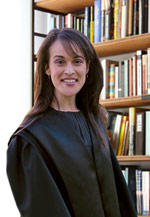 Degree in Law at the “Privata Estema” University of Valencia (2004).

Certificate of professional practice at the Valencia Court 2002-2003.

Certificate of economic sector studies and accounting studies at the “Privata Estema” University of Valencia (2004).

Registered with the Bar Association of Valencia since 2004.

Registered as a European lawyer at the CCBE “European lawyers promoting law and justice” (Consejo de la abogacía Europea) since 2012.

Registered with the Treviso Bar Association since 2013.

Since 2004  she has worked at the Law Office “MS-Abogados – Gestion juridical Nacional e Internacional” – of which he is the Data Controller since 2004.

Since 2000 she has been a member of the legal office of the “Gran Asociacion de Beneficencia de Nuestra Señora de los Desamparados” association, for which he has participated, also as a secretary and speaker, at numerous conferences in Spain.

From 2001 to 2005 she was a member of the Legal Advisory Committee of ASNEPA (Asociacion Nacional de Empresarios Autónomos).

From 2005 to 2014 she was a lawyer for the “Commission of the artistic heritage of the Discalced Carmelites of the provinces of Aragon and Valencia” in Spain.

Since 2007 she is a lawyer member of the “Commission of the artistic heritage of the Discalced Carmelites of the provinces of Aragon and Valencia” in Spain.

Since 2009 she is the Advocate of the “Fundaciòn del Monasterio del Desierto de las Palmas” of the Discalced Carmelites.

Since 2010 she is an associate lawyer in the JCF (Central Fallera junta) employed by the Municipality of Valencia.

Since 2013 she has been collaborating with the “Gardenal & Associati” Law Firm.

She is a speaker in seminars and training courses organized by various institutions and institutions “Ciclos Formativos de Familia” at the ICAV in Valencia-Spain, Training conferences at the SNPP in Asunción-Paraguay, “Conferencia Un Mundo Guay para Paraguay” at “El Centro Cultural Center of El Corte Ingles de Valencia “. He collaborates with the newspapers “Levante”, “Valencia Hui”, “Latino” for the editing of articles on European and international civil and commercial law.